Everyone in this great big world has experienced envy and jealousy multiple times in their life. It can be from “I wish I was as pretty as her” to ” who does that girl think she is flirting with my man?” Now one of the biggest envy reasons among both boys and girls no matter what the age is mostly because we have either a special person in our lives or a crush that we hate to see surrounded by potential suitors. We all have had crushes that we see surrounded by people who we think are more attractive, smarter, or cooler than ourselves and it causes jealousy to kick in. When in a relationship, a little bit of jealousy can be considered cute, but it can also ruin a relationship if it is taken too far. Jealousy is considered a sin because God wants us to love ourselves and to appreciate how he made us, not hate on how he made others wishing we were better.

Most of us have heard the expression “green with envy” multiple times in our lives. With this expression I decided to create an outfit for envy. No this is not a late St. Patrick’s day outfit but it could be used for that as well if you wanted to. Even though the entire outfit is green, it still works because there are different shades and patterns that doesn’t make it look over done with green. I think big odd hats are awesome so I just had to incorporate one. I mean it isn’t as weird as the ones you may see Kate Middleton wearing but it’s still pretty awesome. Also the dress is gorgeous and I love the different shades and patterns used in it. With this outfit you wont be the one who is envious, others will be envious of you!

So I kind of recently just found out that I may have skipped around with the order of the sins…. but we’re all human right? I started thinking about the sloth sin and I couldn’t remember what circle it belonged. After some hard thinking, I remembered that in one of the beginning circles there was a place for those who never did anything with their life. Pretty sure that sloth would fall under that category since people who are lazy and procrastinate don’t get much done.

Even though this outfit is really simple and doesn’t look like much, you gotta admit that it looks pretty comfortable. I’ve been having a lot of days here recently where I try to dress up and look good but then I think about how nice it will feel to be comfortable so I just throw on a T-shirt. Also the bed next to the outfit looks pretty tempting. We all can admit to having really lazy days every now and then. I mean these days we are given the luxury of Netflix and comfortable beds, it’s kind of hard to blame us.

What I love about this outfit is how loose and simple it is. Just looking at it makes me want to put on the outfit and fall asleep. I love sleeping masks because they help shield light from my eyes and I just can’t sleep when I feel the slightest bit of light hit my eye lids. I also love the shoes because I absolutely love it when shoes have that fuzzy interior so they make your feet feel nice and comfortable. All of this sleeping and comfortable talk has got me all tired… I think I may go take a nap now.

I’m A Sinner Series: Wrath Outfit by allyson-gabrielle-dollar
I am so excited to talk about this wrath outfit because one my favorite circles to read of Inferno was the Wrath and the sullen circle. I remember that the wrath had to fight in mud while they ripped each other’s limbs apart and sometimes even beat each other with the limbs they ripped off. The irony with the wrathful is how they hurt others with their words and like pick fights, so now they are forced to spend all eternity picking fights with each other in a much more painful way. Even though the sullen have nothing to do with the outfit, I like talking about them as well. The sullen are those who pent up all feelings such as anger or sadness and never let it out. These are the people who drown in a river for all eternity to represent how in their lifetime they drowned themselves in their own feelings. Don’t you just love irony?
I wanted to be very edgy with this outfit and I really think I was able to capture that. I mean if ear cuffs, spikes, skulls, and leather doesn’t say edgy, I don’t know what will! I will admit that recently I’ve had an obsession with ear cuffs, none with spikes but they are still cute ear cuffs. I know the outfit looks a bit odd as if there is a lot going on but when I picture it all on in my head it completely works and I can totally see an awesome look. I would definitely have to shake off my good girl personality for a few hours in order to pull an outfit like this off.
I would definitely say that one of my favorite pieces is the purse. I definitely love the shade of purple and the gold spikes just look so cool. I also love the ear cuff, but like you guys already know….. I kinda got a bit thing for the cuff. I also have to admit that the leather glove is pretty cool! I mean it’s definitely got to hurt to get smacked by someone wearing it but it still looks awesome!!! I would totally without a doubt wear all of this stuff. It’s probably going to feel a bit uncomfortable but the fun I would have wearing it would over rule the discomfort.

When I think of Greed my mind always goes back to my childhood when I used to watch Spongebob Squarepants. Mr.Krabs truly represented greed with his obsession over money and not wanting to spend a single cent. I remember there was this one episode where they had a stingiest Crab award that went to a crab who truly demonstrated their ability to go a long way by spending little to no money. Greed is the next sin in Dante’s Inferno and it is seen as a sin because you’re keeping something to yourself and not doing anything valuable with it so therefore it’s being wasteful. We all have had moments where we’ve been a little greedy. There have been times where I would see something that I need but then think about how I don’t want to spend my money on it. I have been thinking about this sin and I wonder, would it be greed to possess a skill or a talent and not use it?

This outfit is pretty self explanatory as to why it represents greed. I mean there is money within the outfit itself. Also the yellow and the gold in the outfit is supposed to reflect on currency. I mean someone has got to be pretty protective of their money when they’ve even got it around their neck. I totally feel like this is an outfit Mr. Krabs would look into just so he can count the coins he’s got around his neck. 🙂 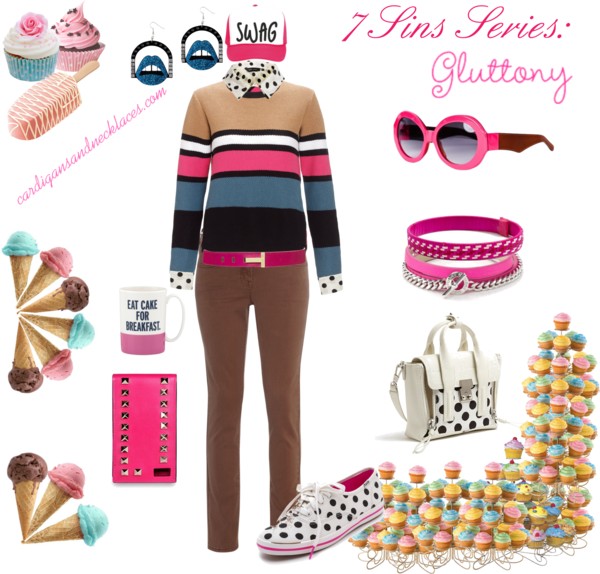 We all have our own favorite foods that we love to eat all the time. Now you cant tell me that you wouldn’t eat a whole bunch of your favorite food within one sitting. I personally love cake and to if we’re being completely honest, I could eat a whole cake all by myself. Sadly eating a lot of cake in one sitting is considered as gluttony. According to Dante Alighieri, it’s a sin because it is considered as wasteful since over eating is not necessary and it’s also an unhealthy practice. But let’s all be completely honest, how can we pass up more than one slice of pizza?

This outfit was fun to create because it was a bit of a challenge. I decided to take a sweeter route since I had already used a deep red for the lust outfit. Also these colors reminded me of candy so I thought it was pretty perfect. I used the lips in the earrings because how else can you commit gluttony if you don’t have your mouth. Plus the earrings looked really cool with the outfit. The mug I included because I would gladly eat cake for breakfast any day! Can you tell I like cake?

Now keep in mind when I say that I’m a sinner, it means that I’m just human and we all have points where we commit a sin.  I’ve decided to do an “I’m A Sinner” series because I thought it would be cool to portray certain sins through outfits. The order I decided to post each outfit is according to the order that it is seen in Dante’s Inferno. By now you all know I’m a huge literature fan and I can read almost anything and I will be interested. When I first read Dante’s Inferno I was completely hooked because I love how the sinners are punished based on the irony of their sin.

I’ve decided to start off with lust because it’s the first circle of sin other than Limbo. People think this circle is only dedicated for those with strong sexual desires but Dante also puts in this circle those who have died for love. Such as Romeo and Juliet, they both killed themselves for love so they would be placed in the lust circle. The sinners are stuck in a hurricane of fire to show the irony for their fiery passions. Now I have mentioned that we are all sinners but I haven’t committed an act of lust. I mean what else do you expect out of a fifteen year old?

As you can see I used a lot of red in the outfit because I wanted to show a fiery passion through the outfit. I mean what can be more fiery than the color red and an outfit with a lot of attitude? For some reason when I see this outfit I can imagine a woman with a lot of confidence and sass wearing it which is more of what I was going for when trying to create and outfit for this sin.