About a month ago I was invited by my friends to go out to the movies in order to celebrate both my birthday and another friend of mine who also shared a birthday in August. We decided that we all wanted to see Guardians of the Galaxy because a lot of kids at my school were talking about how amazing it was. I was super pumped because I always love going to the movies to hang out with my friends. To be completely honest I don’t care for watching the actual movie, I enjoy being able to talk to my friends and I really enjoy movie theater popcorn! Is it just me or does anyone else have an obsession for movie theater popcorn? One of my friends gave me a ride to the movies and it was super fun chilling with them in the car… and we may or may not have sung along to fancy while we were in the car. There are two different movie theaters near where I live and on our ride to the movies, my friend’s grandma accidentally took us to the wrong one. Good thing we left early, because that gave us enough time to drive to the other one and get their on time. One minute later and we would have been late. When we got there we immediately ran out of the car because we saw how long the lines were and we had ten minutes to get tickets before the movie started. Standing in line was pretty cool because the rest of my friends were already there so we just talked about what was new since not all of us went to the same school. After we got our tickets we ran to the popcorn and drink station to fill up our buckets and cups. When I went to go get my usual slushy, (which was a mixture of cherry and coke) they ran out of both flavors! I was sort of upset because I don’t get my slushy fixing unless I go to the movies. So what was I forced to do? I had to get the blue raspberry flavor! How inhumane is that! The world must have been ending! Well that’s what I thought before I tried it. It actually turned out to taste pretty good, not as good as my cherry coke mixture though. Turns out my friends and I know how to hustle when it comes to having ten minutes to get everything together because we made it just seconds before the movie started.

Now it’s time for a movie review!!! I give the movie 3.5 stars out of 5. Now this is pretty good on my rating scale because in order to get 5 stars you gotta be a top notch movie. What I liked about the movie was that it had pretty much everything you could ask for. You’ve go a bit of romance thrown in, scenes that pull at the heart strings, comedy, and tons of action! Now I’m a girl who prefers to see a good battle before a mush love story. If the fight is done well and the action is very engaging then count me in! This movie had a good amount of action and I also enjoyed a lot the funny tidbits that they threw in to keep the audience engaged. After watching that movie my friends and I kept saying “we are groot.” For the sake of spoilers I’ll make sure not to tell you the reason for why we continue to say to this day but it’s pretty cute. I also give credit to the soundtrack that they used! I love 80’s music and that pretty much makes up the soundtrack that is used. I will also admit that I am guilty of singing along to a couple of the songs, but hey! I couldn’t help it, I had to!

I decided to wear a dress to the movies because I knew that we were going to be taking plenty of group pictures. Now I will admit that it’s and odd choice in order to go watch a marvel movie, but there are no laws against it so YOLO! Yes, I am aware that I am the only teenager left on this planet who still uses yolo. No, I don’t care that I’m the only teenager left because I like how it sounds. Now the dress I wore has a tie-dyed sort of look to it. I usually don’t like tie-dyed clothing but I liked how cool it looked with the blue. I also liked how the back was cut out in a v cut. My favorite part of the dress is how flowy it is! I love twirling in it so much because I get to look at the skirt fly up and spin around. I can’t spin too much though because it’ll fly way up too much… that wouldn’t be good at all, quite embarrassing actually. To add some more flare to the dress, I added a white belt with silver circles on it. I know, the pattern play is quite on point if you ask me. The jewelry I kept pretty simple. Some stud crystal earrings, a simple silver chain necklace, and a cuff with white and silver. My shoes were white sandals. This outfit may look a little simple but it also looks very stylish and you can wear it for many other occasions other than to go to the movies. Say you want to walk around town, go on a date, or attend a nice family gathering, this outfit is perfect for those reasons and more. 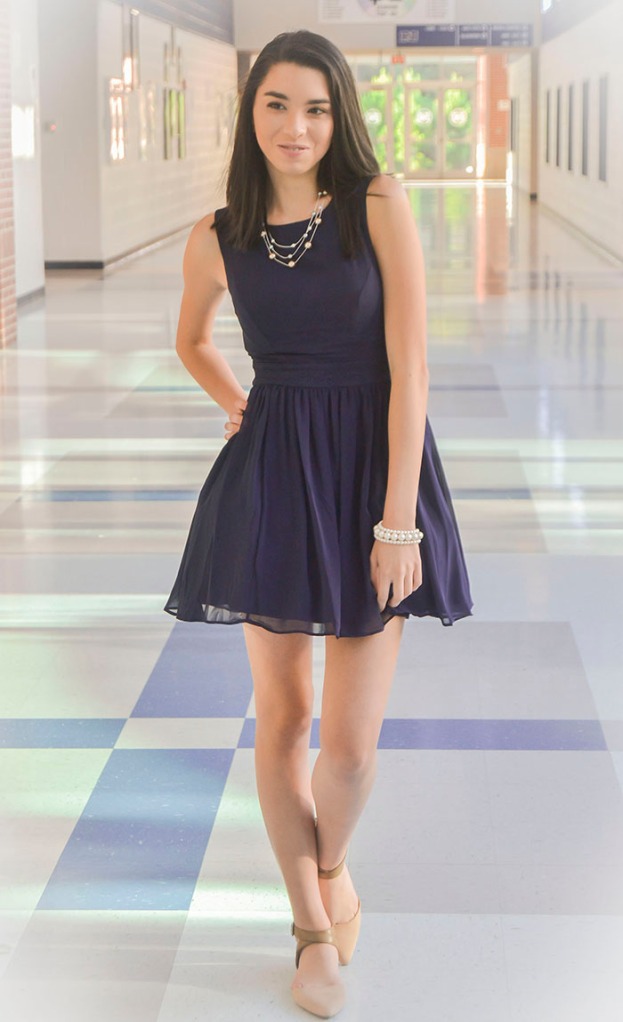 So I know it’s been a while but… I GOT INTO THE BETA CLUB!!!. When I first got the letter I was way excited and humbled because only a selected few get chosen. I wasn’t exactly sure what it was (I know, what rock do I live under), but I’ve always heard about how great it is for college applications so I knew this was going to be a great opportunity for me. I read the long and somewhat boring letter to find out more about the club but the gist of it is that it is an educational youth organization that encourages academic achievement, character, leadership, and service so it requires students to do work around the community. You earn points based on the service you do and for how long you do it. I was pumped when I heard about this because I’ve wanted to do community service for a while now but I’ve never seemed to get around to it. The best part is that I’m doing community service with some of my other friends so we get to be able to share these experiences with each other. They give you a certain amount of points that you must withhold in order to stay in the club as well as keeping up a 3.5 average or higher.  When you sign up for BETA, you are given the option to attend the induction. At the BETA induction they talk about what you do in the club, a bit about its history, who are the officers, we pledged to stay pure (ok, that is not what we pledged), and induct new members into the club (I know, it sounds like a huge snooze fest). We had a dress code to go by, which they basically described to us as:  “dress as you would if your grandmother was going to church”. To them that meant no jeans, t-shirts, tennis shoes, and any other informal wear of the sort. Wouldn’t have been easier to just say casual elegant?

Before the induction ceremony started my mom and I went through the halls of the school and took some pictures of the outfit. I also caught up with a few of my friends that I had not talked to since school started because we no longer have classes together. There were over 170 new sophomores being inducted that night and it was a long process. Trying to line up 170 chatty teenagers in alphabetical order was difficult and no one seemed to want to pay attention to the poor teacher who kept yelling over us to get our attention. I will say that he was not the man for the job, most of the students were taller than him and to top it all of he was sick, so yelling was difficult for him. They should have had some of the cheerleaders bring out their megaphones and allow the man to use it. The induction process was longer than I expected and it got sort of boring, then finally they started pinning kids and giving out certificates. Of course as the socially awkward person I am I went out there walking as if I was the tin man from the Wizard of Oz and needed oil in my joints. I thought I did completely fine just walking and smiling, in fact in my head the walk went down as if I was walking a catwalk or something… and then I saw my mom’s pictures. I wasn’t really smiling, and my walking was stiff and all over the place! But what can I say, at least my outfit looked good and took some attention away from my actions or at least I hope it did.

What I wore was a navy blue dress that had an open back which was covered with lace. I also wore a pearl necklace that had different subtle colors such as a pearl white, light grey, and a soft gold. The bracelet was pearl white as well as my earrings. My shoes were a nude color and brown to go along with the necklace. I made sure to keep the outfit more on the simple side because it was a semi formal event and I didn’t want to wear a color that wasn’t appropriate for the setting. The dress was very comfortable, especially since we were there for more than two hours. I started looking around at what some of the other girls were wearing and I saw a lot of the same things. I saw a lot of maxi and skater dresses paired up with long over sized cover ups. I also saw a lot of girls wearing sandals, I understand it’s still hot outside but this is a semi formal event people! I don’t know about you but when I think semi formal, sandals are definitely not the first thing that comes to mind. Yep! I’m up to a good start this year.

Loved the back of the dress!