A show that has a lot of people raving about it is The Walking Dead. The show has more followers than I ever thought it would get considering it is after all a cliché end of the world show. I will give it to them, it is one of my favorite shows of all time. If I miss a show, then a fit is thrown! I’ve watched it since it came out and I’ve seen every single episode (more than once). Every time a Walking Dead marathon comes on, I’m on top of it with a bowl of popcorn in my hand and my undivided attention. I will say that I love The Walking Dead more than Doctor Who, you can’t go wrong with zombies. If you give a me a really good show/movie with zombies in it, then I am hooked and watching it.

This show doesn’t need very much explaining since it’s taking place during the zombie apocalypse. Pretty much the whole time all they’re trying to do is survive from both the dead and the living. There is always lots of drama and action in this series which makes for a really entertaining hour. There have been many times where I would be watching and then suddenly, boom! Something super epic happens and it leaves me in shock for the rest of the night. I really recommend this show unless you’re not good with gruesome things or scared of zombies, because then you’ll have nightmares. It’s actually really odd for me to love this show so much because I don’t take the sight of blood well, I always feel dizzy when I see it. I have actually fainted at the sight of blood in the past (but that is another story). When it comes to The Walking Dead I don’t mind it at all and sort of like seeing the blood everywhere, adds to the action.

My favorite character in this show and my favorite character of all time is Daryl Dixon. He’s a butt kicking redneck that has confidence and bravery, yet still has the sweetest and softest side to him. I’ve stuck by Daryl since the beginning but as episodes went on, I started to fall in love with him. When I tell you that Norman Reedus is my celebrity crush, I truly mean it. He’s just so amazing and if he ever dies it will be the end of my heart. I swear that if they kill Daryl I will revolt, start a riot, and stop watching the show. Well maybe I won’t stop watching, but I won’t enjoy it without him. I’m not ever going to be emotionally prepared if they do decide to kill him. I will be a sobbing mess and it will not be pretty. Plus, that will ruin my whole year because they decided to kill my favorite character of all time and I will never forgive the writers of The Walking Dead. Fangirling much!!!!?

I’ve added some Walking Dead bags, clothes, jewelry, and cases for those of you who feel like zombies when walking into school (do you see what I did there?). I have to admit that finding zombie pieces that are wearable and stylish was really difficult. As you can imagine a zombie theme does not scream style but I did manage to find some that I would totally wear and style in a chic way. Like I’ve mentioned before, the key to wearing your favorite geeky clothing and looking stylish at the same time is moderation. Walking in with Walking Dead everything is not going to look all that great and it may seem a bit weird for others. If I had to choose something from all of this merchandise, it would be the Team Daryl T-shirt. Looks like Edward and Jacob are going to have to move aside, there’s a new team in town and he’s locked and loaded.

Make sure to leave comments on your favorite fandoms and what you personally fangirl about. It can be about any book, show, or movie. Let your true geek colors show and write it down. I enjoy reading all of your comments and I’ll make sure to comment back.

Most of the items selected are from etsy which is a super awesome source to find weird and unique items that not everybody is going to already own. Give some love to the etsy featured stores below.

Just a few days ago I was watching TV and all of a sudden a demonic commercial came up. Tales of kids going back to school! I had to cover my ears it was so scary! Kids around the world are crawling up into little balls in hope that the summer is not yet over. It almost feels as if we just started our summer break and they have decided to start recruiting us back to that child jail! I’m definitely not ready to go back to school. I got used to sleeping in and doing nothing. I remember at the beginning of the summer I couldn’t wait to go back to school because I had already missed all my friends. I was getting a little antsy since I didn’t really have anything to keep me busy. What I am looking forward to is being able to meet new people and make new friends. I’m also excited to start show choir this year! I’m not looking forward to all the homework I’m going to end up with every night!

The only thing that cheers me up when I hear back to school is the shopping. I like being able to get new outfits that I can wear to school because it’s a lot of fun to style them. One of my favorite parts of shopping is looking for the backpack. I get backpacks based on size, look, and quality! I like a backpack that can hold a lot of things and won’t break, makes it a lot easier on me. Looking for a backpack is different for me because with clothes you wear something different every day. Backpacks you usually wear every day to school so you want something really cute that will last you.

I went online book bag shopping and decided to share my discoveries with you! I found a lot of cute bags all at different prices. Since everyone has their own price range, I decided to separate the book bags by price. I went through a lot of online stores looking for book bags and looking for all price ranges. I found a lot of different book bags that all look very nice! I also divided each price category for different styles. There is casual, sporty, black staple, elegant, whimsical, and stripes.

The first category we have is the $0-$25 price range. Just because you may be on a budget doesn’t mean that you still can’t get a nice looking bag. I have actually found multiple book bags that are super cute within this price range. Here’s a tip for those who have a budget: sale and clearance shopping is key! Just because it’s on sale doesn’t mean it will be any less cuter than some of the other things on display. 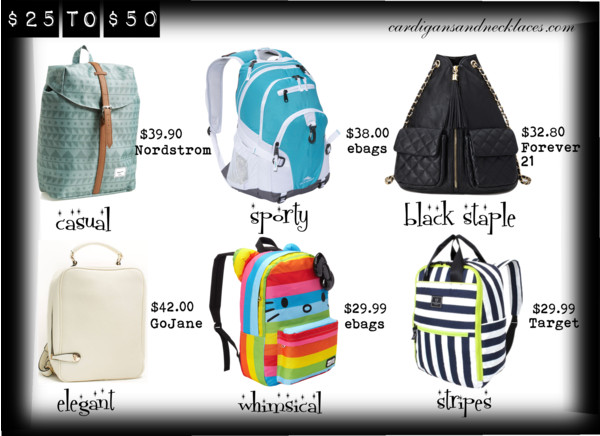 The next category is the $25.01-$50 price range. Since it’s a higher price range, you will get better quality bags and a lot of nice designs. This category was one of the easiest to find book bags for. For this price range hitting great sales can help you a lot as well. 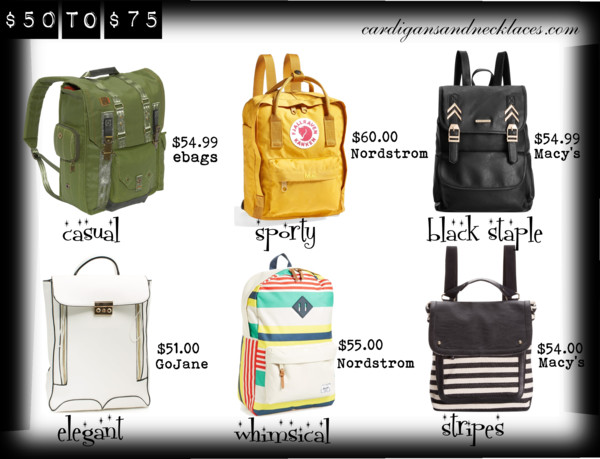 This continuing category is the $50.01-75 price range. When I started looking through this category I started to get amazed with how cute some of these bags are! 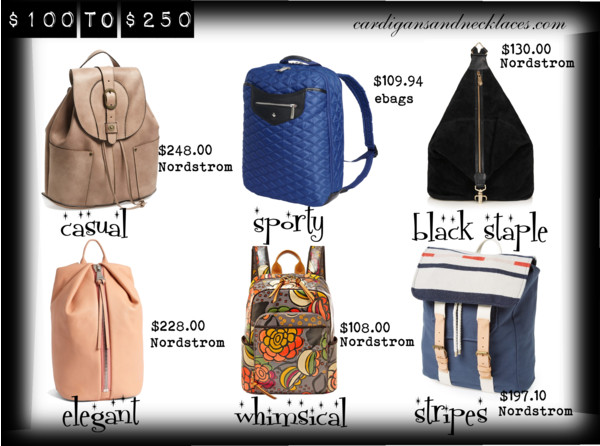 The second to last category is the $100.01-$250 price range. There are so many cute book bags in this category! They all look designer…well maybe because they are.

The very last category is the $250.01 and up price range. I know what you’re thinking, isn’t a little absurd to spend hundred of dollars on a book bag? Well, some people can afford thousand dollar book bags, and for those people I made this category. But I will say that these book bags are super cute and I love each and every one of them!

For more ideas on bags, make sure to look below!